Jeremy Griffith was born in 1945 and raised on a sheep station in rural New South Wales, Australia. He was educated at Geelong Grammar School and later graduated in biology from Sydney University. He spent six years in the wilds of Tasmania where he undertook the most thorough investigation ever into the plight of the Tasmanian tiger (thylacine), concluding that it was extinct.

During this time, aged 27, Jeremy shifted his exploratory focus to humanity, which has remained his life’s preoccupation. He started writing about the human condition in 1975, established the World Transformation Movement in 1983 (originally established as the Foundation for Humanity’s Adulthood), published his first book, Free: The End of the Human Condition in 1988, his second book, Beyond the Human Condition in 1991, and his bestselling third book, A Species In Denial, in 2004.

In 2016 Jeremy's definitive treatment on the subject of the human condition, FREEDOM: The End Of The Human Condition, was launched at the Royal Geographical Society in London, with twice-honoured Order Of Australia recipient and the first Australian to climb Mt.Everest, Tim Macartney-Snape and acclaimed humanitarian Sir Bob Geldof. 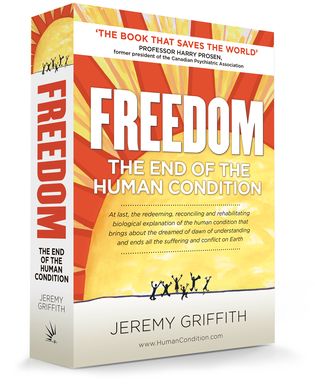 Each of Jeremy Griffith’s published works is grounded in his first-principle-based biological explanation of human nature. His work is multi-disciplinary, and has been described as ‘grand narrative’ in approach, drawing from the physical sciences, biology, anthropology, and primatology together with philosophy, psychology, and psychiatry. He cites thinkers from all backgrounds and eras, from Socrates, Plato, and Christ, through to more contemporary philosophers and scientists, such as Charles Darwin, Pierre Teilhard de Chardin, R.D. Laing, Louis Leakey, Jan Smuts, Eugene Marais, Olive Schreiner and Sir Laurens van der Post.

The books and other publications Jeremy Griffith has written on his breakthrough biological explanation of the human condition are published by WTM Publishing & Communications.